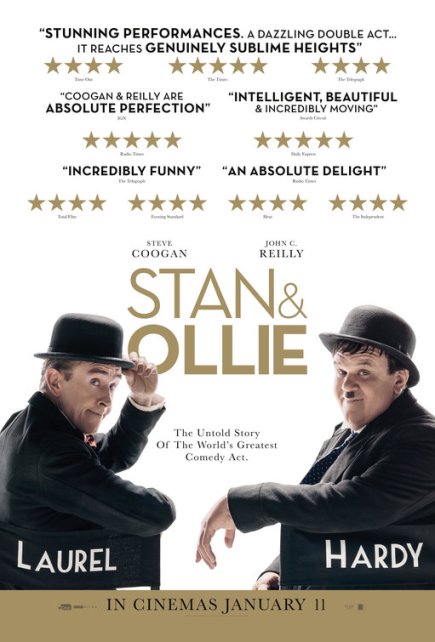 In 1937, Hollywood double act Laurel and Hardy were household names and at the peak of their careers, their vaudeville-style slapstick routines filling cinemas across the globe.

Baird opens this gentle and nostalgic biopic with an impressive tracking shot that follows the comedic superstars through a bustling Hollywood backlot and onto the set of their latest film.  The witty dialogue shooting between Stan Laurel (Steve Coogan) and Oliver Hardy (John C. Reilly) swiftly degenerates into a squabble over money and contracts with their producer, Hal Roach (Danny Huston).

Both comedians are facing financial difficulties as a result of alimony commitments and onerous contractual obligations that are proving far more lucrative for the Hollywood studios than the stars themselves.

Cut to 1953. The duo’s fame has faded and it’s been years since their last film together. They arrive in Newcastle, England, where they’re checked into a dingy boarding house on the eve of a British stage tour and the realisation dawns that this will be a far less prestigious affair than promised.

Playing to small audiences in music halls throughout England and Ireland, the pair’s polished timing and on-stage chemistry proves to be a thin veneer beneath which they are struggling to come to terms with the winding down of their popularity and relevance.

After they are talked into some publicity stunts, the audiences begin to swell, eventually securing them a prime booking at London’s Lyceum Theatre. But just as their career momentum begins to rebuild, unresolved resentments from their Hollywood days surface and, on top of the enormous physical and emotional toll of the tour, their relationship fractures.

The arrival of the wives gives both the duo and the audience a welcome boost. Laurel’s wife Ida (Nina Arianda) is a breath of fresh air, a sharp-talking Russian whirlwind, and she and Hardy’s tiny, squeaky-voiced wife Lucille (Shirley Henderson) form an unofficial comedy duo of their own.

Much like Laurel and Hardy’s comedy, this film is simple and sincere. Coogan and Reilly’s impersonation of Laurel and Hardy is utterly convincing and their re-creation of some of the performers’ most famous routines is uncannily accurate. Reilly, in particular, brilliantly embodies Oliver Hardy down to the tiniest details (and his prosthetic double chin is flawless – it even sweats realistically).

This is sweet and affectionate biopic. If you appreciate the comedy of a gentler time, its nostalgic re-creation of the final performances of two beloved comedy icons will definitely make you smile.