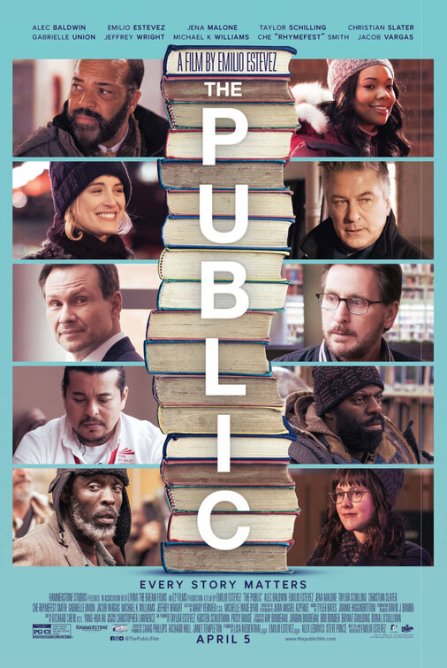 A group of homeless men occupy the Cincinnati Public Library in a bid to escape brutal winter weather in writer/director Emilio Estevez’s uplifting and empathic crowd-pleaser The Public.

Estevez tackles a raft of contemporary social justice issues, with homelessness, racism, climate change, mental illness, drug addiction and income inequality all intersecting within the confines of a public library.

The Public is a film that feels curiously old-fashioned despite its current subject matter, reminiscent of films such as The Full Monty, Brassed Off and Calendar Girls in its earnest social intent and ultimately heart-warming resolution.

Across the world, homeless populations have found shelter within public libraries where protection from the elements, bathroom facilities and access to information and the internet are free and available to all. This is certainly the case in the Cincinnati Public Library, where homeless patrons use the space to escape the extreme Mid-Western weather.

Librarian Stuart Goodman (Estevez) witnesses this all first-hand from his post in the Social Sciences section of the library. This particular day begins normally with some verbal sparring with co-worker Myra (Jena Malone) and an incident with a mentally ill patron.

Things begin to unravel when, at closing time, a group of homeless men decide to stage an Occupy-style sit-in of the library. Encouraged by Jackson (Michael K Williams), the group demand to use the library as emergency shelter to escape the extreme conditions outside that are literally freezing some of them to death each night.

With homeless shelters at capacity and their only alternative being to sleep rough, Stuart sees their plight and allows the band of homeless men to barricade themselves inside the Social Sciences section.

The police are alerted and the situation swiftly escalates, much to the frustration of both the sympathetic head of the library (Jeffrey Wright) and police negotiator (Alec Baldwin), whose own son is an addict and may be caught up in the action.

Spinning the situation to their own advantage are TV reporter Rebecca Parks (Gabrielle Union), who sees this as her break into national media, and Josh Davis (Christian Slater), a city prosecutor running for Mayor on a “law and order” platform. Both twist the narrative from peaceful sit-in to hostage situation and in the process portray Stuart as an unhinged radical. Before long, SWAT is on the scene and violent eviction seems imminent.

This is a classic, crowd-pleasing film that could be charged with being overly-simplistic about the knotty issues it tackles, but it does so with such warm-hearted intention that, by the time the credits roll, all is forgiven. It’s a beautifully shot and directed film that openly wears its heart on its sleeve as an ode to one of the last surviving bastions of free information and public space – the public library.