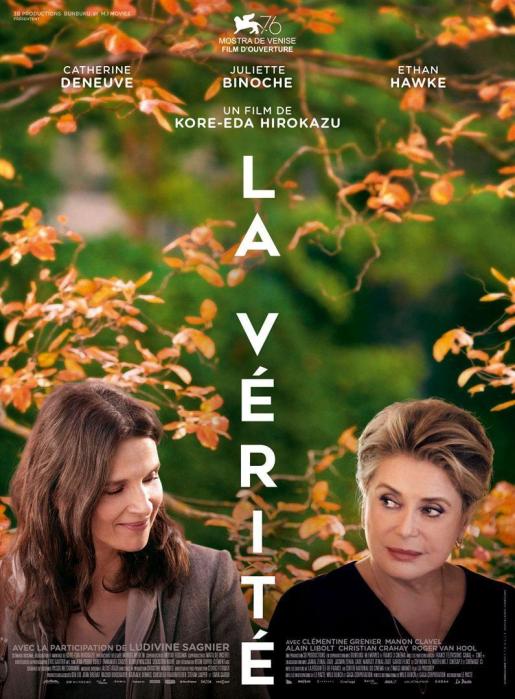 Catherine Deneuve commands the screen as a movie diva in the twilight of her career in acclaimed arthouse director Hirokazu Kore-eda’s first film outside his Japanese homeland.

The Truth, set in Paris with a principally French cast, focusses on the drama stirred up by screen diva Fabienne Dangeville, a legendary, César-winning French actress, now in her 70s, who has just published her memoirs.

Played by Catherine Deneuve – herself a beloved, larger-than-life icon of French cinema – it’s easy to assume the role didn’t move Deneuve far beyond her comfort zone. Yet she is magnificent as Fabienne; her portrayal of the prima-donna’s lacerating narcissism and embodiment of a screen artiste who takes herself too seriously is clearly far more nuanced than a thinly veiled version of herself. Instead, Deneuve’s own position as an icon of European cinema imparts a sense of authenticity to both her performance and the rest of the cast’s reactions to her character’s self-absorption.

The story unfolds in Fabienne’s large home in the Parisian suburbs on the eve of her memoir’s publication while she is preparing for a new film role. To celebrate the release of her book, titled The Truth, she’s visited by her daughter Lumir (brilliantly played by Juliette Binoche), who is a screenwriter based in New York, and Lumir’s husband, Hank (Ethan Hawke), a B-Grade TV actor. They’re a loving couple with a young daughter, Charlotte, played by the scene-stealing Clémentine Grenier.

This is Lumir’s childhood home and her memories are far from complimentary about Fabienne’s role as a mother. As Lumir reads her mother’s memoir, she is aghast, and the book soon bristles with post-it notes marking all the places she takes issue with Fabienne’s version of their shared history.

Yet when she confronts her mother about the depth of deception in The Truth, Fabienne is unrepentant, claiming that as an actress it’s her job to embellish since the unvarnished truth is inherently uninteresting.

As the film progresses, we come to see that even Fabienne’s innate outspokenness is just more of her stagecraft. The only authentic thing about her is that she is the consummate actress – she’s always acting.

Mother-daughter relationships are the heart of this film. The discord between Fabienne and Lumir, provoked by Fabienne’s unreliable version of the past, is highlighted by the film Fabienne is shooting. It’s a sci-fi mother-daughter drama directed by a young arthouse director, and this film within the film provides a clever meta-commentary on the relationship drama unfolding under Fabienne’s roof.

Fabienne’s role in this movie is to play the daughter, the premise being that her terminally ill mother was sent to space (where you don’t age!) to save her life. The mother can only visit her daughter every seven years, her daughter gradually overtaking her in age. By the time the daughter is in her 70s (and played by Fabienne), the ageing actress is now playing a version of her own daughter – a woman feeling abandoned and unappreciated by the mother from whom she craves love and attention.

Although The Truth may seem a heavy title for a film centred around mother-daughter dynamics, it’s highly apt given that underlying the dominant action is a thought-provoking meditation on what constitutes truth and the slippery nature of memory, bringing a rich thematic complexity to the film

Kore-eda has accomplished something remarkable with this film and it will attract a surprising viewer mix, appealing to his fans, devotees of French art-house cinema and those drawn by the dual magnets of Deneuve and Binoche’s powerhouse performances.