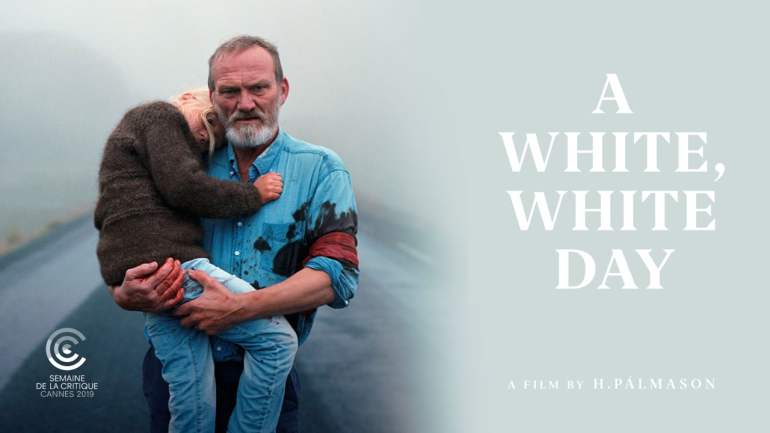 In an age of “slow food”, “slow fashion” and “slow TV”, it was only a matter of time before the movement caught on in film. Icelandic director Hlynur Palmason’s A White, White Day, with its deliberately paced and non-traditional narrative style and slowly compounding sense of tension, could easily fall into the genre of “slow cinema”.

But make no mistake, “slow cinema” is in no way a euphemism for “boring”. Just the opposite, since this style of film-making challenges viewers to move beyond the expectations hammered into us by Hollywood.

A White, White Day is far more than a powerhouse character study of a man undone by grief, it’s a subversion of the classic structure of the psychological thriller.

At the heart of this film are the universally powerful themes of grief and revenge. A man loses his wife in a car accident and two years later he is still mired in his grief. By chance, he discovers a clue tucked in a library book that suggests his marriage may not have been as strong as he’d assumed. As an ex-cop, his curiosity soon spirals from a covert investigation into full-blown stalking of the man he suspects was his wife’s lover.

While the plot may feel familiar, the methods Palmason uses to tell the story of Ingimundur’s (Ingvar Sigurdsson) unravelling and to heighten tension are far from ordinary. Sigurdsson is brilliant as a grieving man pushed to violent extremes, as is Ida Mekkin Hlynsdottir, who is absolutely mesmerising as his eight-year-old granddaughter, Salka.

The film opens with a long, unbroken shot of a car speeding along an icy Icelandic road. Visibility is poor. The camera follows close behind the car as it weaves along, cornering too fast, the shot rolling on and on until the car misjudges a curve and disappears over the edge.

The car has vanished, yet the camera keeps rolling for a dozen or more unbearable seconds. It’s an agonising scene that seems to roll forever. We have no idea who was driving or their significance to the story. The combination of extended voyeurism of the accident yet lack of all context is excruciating.

Palmason cunningly manages to sustain this level of audience anxiety throughout the film, with every scene possessing some degree of uncertainty about its meaning to the overall story. The audience is constantly on its toes, combing every conversation, gesture and image for significance to the broader story.

This hypnotic film challenges viewers to recalibrate their expectations to its deliberately paced and subversive cinematic style, and it’s testament to the director and performances that it holds viewers so successfully in its excruciating yet exquisite thrall.